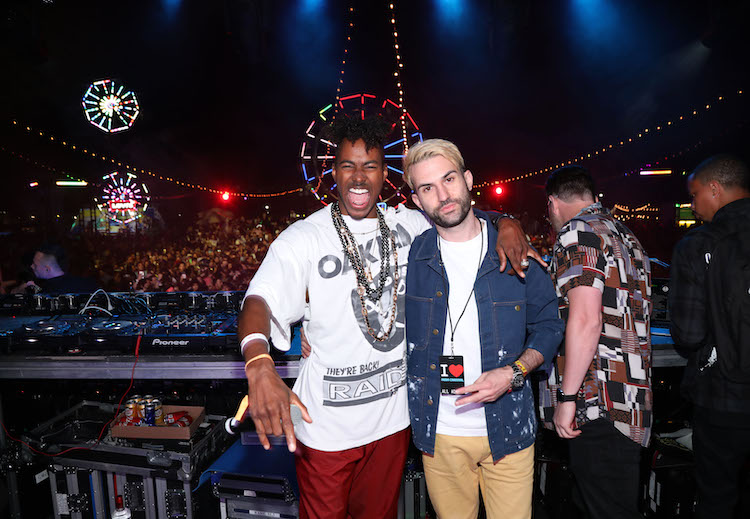 Neon Carnival, the highly anticipated desert experience, returned to illuminate the night sky on Saturday, April 13th, with its biggest fête to date in celebration of its 10-year anniversary. In partnership with Levi’s® Brand, the exclusive event welcomed new additions including Australian born beauty brand Bondi Sands and the upcoming big-screen adventure POKÉMON Detective Pikachu to commemorate another year of music and festivities. Conceived by LA’s original nightlife maven, Brent Bolthouse, the unrivaled outdoor dance party recognized as one of the world’s most coveted after-parties, attracted the industries entertainment elite. Neon Carnival veteran, Leonardo DiCaprio, who hasn’t missed a single one, was spotted chatting with Founder Brent Bolthouse. The two were overheard discussing the new layout and setup and the expansion into weekend 3 as Brent joking nudged Leo if he had plans for April 27th. The remainder of the night, DiCaprio kept a low profile remaining incognito in his hooded sweatshirt, hat and glasses while getting cozy with Argentinean model Camila Morrone dancing to the sounds of DJ Ruckus. Festival faithful, Paris Hilton and Alessandra Ambrosio were spotted sharing a moment while joining the stage for their own dance party. The two showed off their dance moves while snapping selfies as on looking partygoers watched in awe. Cleveland Brown’s newest WR, Odell Beckham Jr. arrived with Sports Illustrated model, Danielle Herrington and pals in matching color-coordinated neon outfits with beanies and bright kicks. Beckham was spotted dancing his way to their table before pal Von Miller came from behind for a hug. Rapper 2 Chainz arrived in style donning in a green sequin Gucci ensemble with matching shorts and tee. The Rap or Go to the League artist made a statement with his festive attire catching the eyes of friends and fellow musicians, Quavo, Young Thug and Meek Mill inside the packed party.