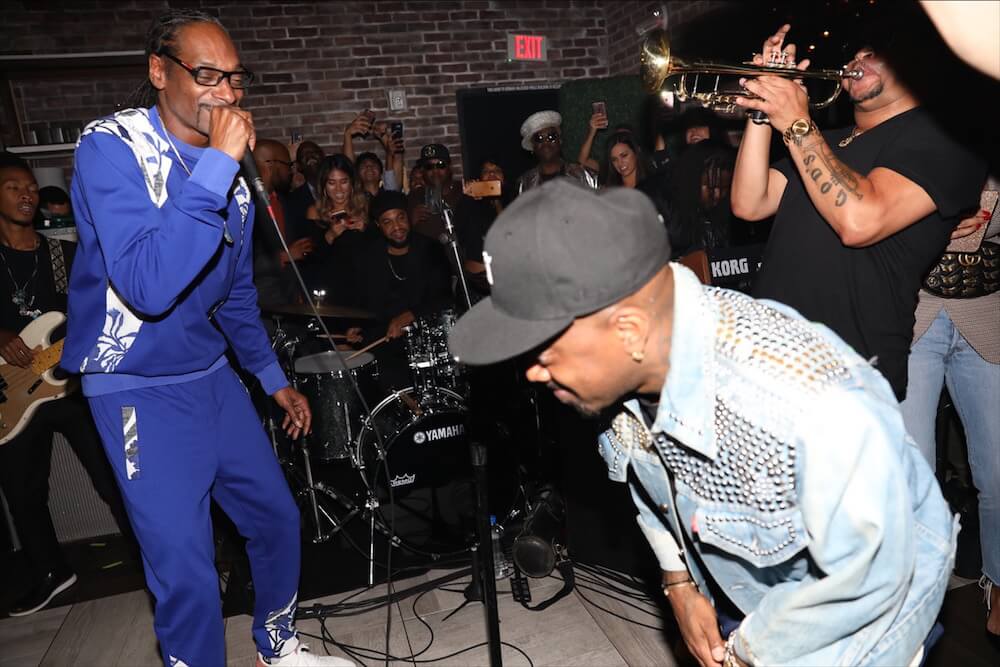 On Monday night, Hollywood’s hottest rooftop eatery, Catch LA marked its one year anniversary! Hospitality impresarios and co-owners of Catch LA, Eugene Remm and Mark Birnbaum, hosted an A-list celebration alongside close friends Snoop Dogg, Marlon Wayans, Tobey Maguire, Jesse Williams and more. Party-goers got a surprise of a lifetime as hip-hop legend Snoop Dogg hopped on the mic for an impromptu performance of Drop It Like It’s Hot, Next Episode and Nothing But a G Thang. Following the epic performance, actress Karreuche Tran hung in the private dining room which was decked out with thousands of cascading lights, flowers, a vintage cotton candy machine and statuesque body-painted models. Tran joined all-star athletes Deandre Jordan and Draymond Green who were seen catching up with LA Clipper’s head coach, Doc Rivers. Jermaine Dupri and Scooter Braun were also spotted by the DJ Booth with musician David Foster who later posed for photos in the pop-up photo booth with model Joanna Krupa. Foster caught up with close friends Mohammed Hadid and Shiva Safari who sipped on custom Absolut Elyx cocktails. The event marked the milestone year for partners Mark and Eugene together with their newly announced partnership with billionaire and Houston Rockets owner Tilman Fertitta who plans to expand the Catch brand across the world. On Tuesday, September 20th, Maie Wines, Hi Note, and the…

How To Store Your Shisha Molasses To Preserve Its Flavor

Shisha has been a part of the Middle Eastern culture…